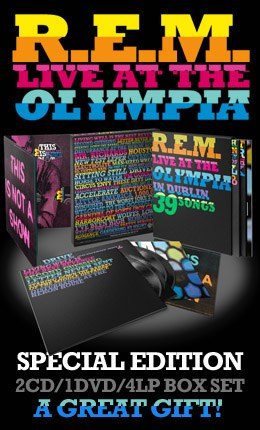 It’s been another whirlwind “off” year for R.E.M with a couple of stellar reissues, a live album, a concert-documentary, and, last but not least and most exciting, a new record in the works. June saw the release of the Reckoning Deluxe Edition followed by the release of the Murmur vinyl package. The two-cd set Live At The Olympia came out in October to excellent reviews everywhere, and This Is Not A Show, the concert-documentary by Vincent Moon opened in Minneapolis in September at Sound Unseen; the film went on to screen in numerous locations throughout North America and Europe including Dublin, Copenhagen, and Barcelona. On top of all of this activity, the band returned to the studio in November, where they spent the month recording in New Orleans with Jacknife Lee at the Music Shed. Based on some of the early sights and sounds coming from the studio, next year promises to be a big one for the band and fans. We hope to continue to bring you reports, photos, and exclusive studio videos, so stay tuned.

This Is Not A Show will premiere on The Sundance Channel on December 28th at 9PM EST during the channel’s Docday Premiere Slot.

On Saturday, December 19th, the 40 Watt Club will be the scene of “Living The Dream,” a special night of music celebrating the tremendous musical legacy of guitarist Jon Guthrie who died tragically in late September 2009 in a single-car accident in Clarke county. The show will include performances by 18 bands according to Jon’s father, Michael Guthrie, a longtime Athens musical mainstay and founding member of MGB, who coordinated the show. Music will begin at 6pm and will include performances by Love Tractor, Hayride, Guff, and fifteen other bands and solo performers. In addition to the live music, there will be a raffle and an auction, and merchandise. Read more at flagpole.com about the first annual Jon Guthrie Memorial Show.

Still looking for gift ideas for the R.E.M. fan in your life? It’s not too late. The special edition2CD/1DVD/4LP box set of R.E.M. Live At The Olympia is a must have for any fan of the band, especially collectors. Also, the excellent Stavanger Photo Series by Oyvind Svele is available in the Merch Store and would make a great gift.

For Your Reading Pleasure:

Finally, Pylon fans should be sure to read the article by Jordan Stepp at flagpole.com on Pylon called “Highs and Lows: A Decade in Review.”

R.E.M. HQ @remhq
14 hours ago
If you missed Michael's live conversation with ICA Milano Director Alberto Salvadori yesterday, it's now available to watch on Fondazione ICA Milano's YouTube channel. Check it out as they discuss Michael's third book in the @damiani_books series!