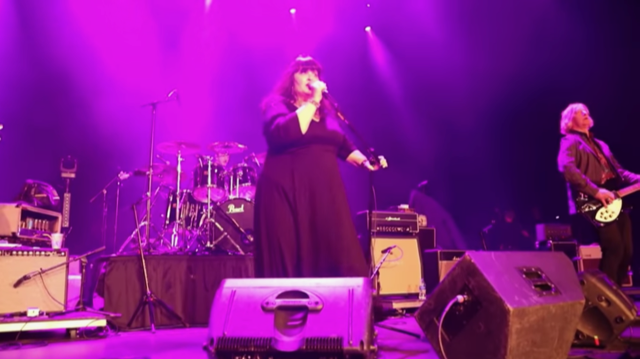 On September 13, 2019, Bill, Peter, and Mike performed a few songs at the Fabulous Fox Theatre in Atlanta for the “Revival” show to benefit Georgia’s historic theaters. One of the songs was Pylon’s “Crazy” which fans will remember as the opening track on R.E.M.’s Dead Letter Office and one the band had included in their sets often through the years. Pylon’s Vanessa Briscoe Hay, who sang “Crazy” with Bill, Peter, and Mike that night, gives us the scoop on how it all came together:

“I found out later that Mills, Berry and Buck had reached out to me to sing because they wanted to be sure to include some female artists in their secret portion of the ‘Revival’ benefit. They reached out first to the amazing Kelly Hogan (Jody Grind) – but, she wasn’t available. She said, “why don’t you ask Vanessa?” Dang!

R.E.M. had performed “Crazy” by Pylon on and off for years in their set, so it was the natural choice to do. I learned their version just In case. Fortunately, they had learned Pylon’s version which reduced my anxiety. I asked Sandra-Lee Phipps to come film me in between doing some Andy Warhol style screen tests there for the unreleased doc Athens, GA..30 Years On.

Backstage, major Georgia artists like Kevin Kinney, Tom Gray, Rick Richards, David Barbe and young guitarist Owen Lange were lined up like planes at Hartsfield ready to perform too. The audience was so pumped! Then it was my turn, I walked out there and I half expected to hear crickets, but they roared for me too. The guys were all smiling and gee- all of a sudden, I wasn’t nervous. It was so cool to hear Crazy played by one of the greatest bands in the world live- and an honor to get to sing it with them. This song over the years has become special to many people for many different reasons. In these crazy times, it feels appropriate again.”