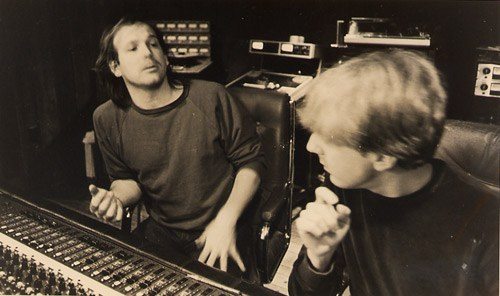 This past Friday night in Winston-Salem, Mitch Easter and Don Dixon (producers of R.E.M.’s Murmur and Reckoning) got together with former Rolling Stone writer Parke Puterbaugh to discuss the making of Murmur. The panel was part of the Revolve Film Music Festival’s music night and it was generously filmed by treehousemobile.com…

UPDATE: Read this article about the discussion at yesweekly.com

Shalini Chaterjee, director of Revolve, gave remhq.com some background on how the discussion came together:

“I got the idea for this program from sitting around with Mitch and Don Dixon, who works in the studio (Fidelitorium Studio) here quite a bit. We usually get some records out and end up talking about them. The remastered-for-CD Murmur came up, and I had to put it on a couple months ago, hoping it would get those guys talking about the experience, which they do sometimes anyway. It was so fascinating. Did you know, for example, the “thunder” on ‘We Walk’ is the band playing pool during a break? I thought it was intentional to evoke a stormy night walking through woods. I have been listening to this record since I was 15 (1984 era) and always wondered about all the sounds. How did this group of people make such an evocative and timeless record? What were the circumstances and the tone of the sessions?”

Shalini added, “This little non-profit I started, Revolve Film Music Festival, features a music night and addresses the new overlapping genre of music and film. I needed a music program for this year’s festival (last year we had Pylon, which was going to be hard to top) and asked Mitch and Dixon if they’d be interested in a “Murmur panel”. They both were, and when I asked ex-Rolling Stone writer Parke Puterbaugh to moderate, he was super enthusiastic. The program came together on its own. The Garage graciously held the date for us when the program became a possibility. So what happened was those three got together and just talked about the making of the record, allowing time for audience questions. The discussion generated a lot of excitement that still lingers here in Winston-Salem. We’re looking forward to the re-mastered for CD Reckoning now.”