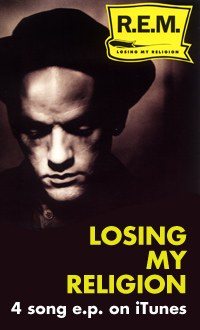 As we mentioned earlier this week, iTunes is offering a special four track Losing My Religion EP, including studio, acoustic and live versions of the song for $2.99. Here are the tracks:

1) Losing My Religion (Out of Time Studio Version)

Here’s what Rock Band has to say about the download pack:

R.E.M. has always had a special place in the hearts of Rock Band fans. Long-time fans of the game probably remember rocking out to “Orange Crush” on the original game disc. And since then, the single “Losing My Religion” has been a staple in the game’s song library. This week in DLC, we up the ante with eight songs by the band, spanning their illustrious career.

Starting in their early years with the band’s first single, “Radio Free Europe,” and criss-crossing all the way to their latest album with “Living Well Is the Best Revenge,” the pack is filled with the band’s trademark alt-rock stylings and enigmatic lyrics. Guitarists will enjoy jamming along to Peter Buck’s distinctive guitar play from “What’s the Frequency, Kenneth?”. Not to be outdone, vocalists will be sure to check out “It’s the End of the World As We Know It” to see if they can keep up with Michael Stipe’s rapid-fire cacophony of verses. And of course you can always parody your own Weird Al-inspired version of their Green album hit, “Stand.”

Also available this week are “Driver 8,” “Living Well Is the Best Revenge,” “Superman,” and “These Days.”

Scott McCaughey says: “Yeah, this time we’ve come up with some fearless post-season “predictions”, probably every bit as accurate as our “Cubs 2010” and “30 Doc” songs… The latest story and free song download are available. Go, Giants!”

An advance screening of the DVD – “R.E.M. Live from Austin, TX” (recorded during Austin City Limits in 2008) will take place on Monday, October 25 at Cine in Athens, GA, one day ahead of the official release of the DVD on October 26th.

(a New West Records release of the band’s performance on Austin City Limits on March 13, 2008)

Screening will also include footage of additional video from 2008, circa Accelerate. Copies of the DVD will be available for special purchase at the event.