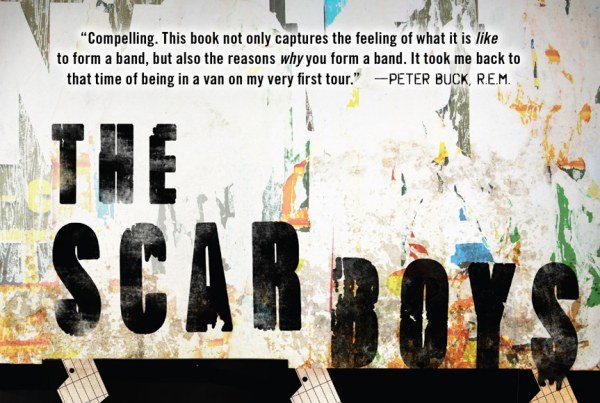 Author Len Vlahos is the current Executive Director of the Book Industry Study Group in New York City. During the 1980s, Len lived in Athens where he was in a punk rock band called The Woofing Cookies for whom Peter Buck produced a song called “In the City.” 28 years later, things have come full-circle as Peter has written the blurb for the cover of Len’s debut novel The Scar Boys. Len’s article below tells the story of his band’s initial meeting with Peter, how Len came to be an author, and how the book blurb connection was made… Len will be in Athens on April 15th for a reading at Avid Bookshop.

In 1985, when I was twenty years old, I dropped out of NYU film school and went on the road as the guitar player in a punk-pop band called Woofing Cookies. We put out our own record, mailed it to radio stations and nightclubs across America, and booked a thirty-city tour, coast to coast.

Eleven days in, somewhere near Spartanburg, SC, our van, threw an engine rod. We used all of the money we had left and had the beast towed to our next gig in Athens, GA. When we learned that it would cost us $1,700 to repair the engine, we did what any self-respecting group of neo-rockers would have done: We crashed with some skate punks, took fast food jobs to earn money to fix the van, and started canceling tour dates.

As we watched the tour go up in smoke, we settled into life in Athens. Luckily for us, life in Athens in the mid 80s revolved completely around music. Bands like the Kilkenny Cats, the Bar-B-Q Killers, and Love Tractor were the flesh and blood of a vibrant music scene. The beating heart of that scene was, of course, R.E.M.

The Cookies and I wound up living in a house on Hill Street, which just happened to be diagonally across from Peter Buck’s house. Two of us worked up the nerve to cross the road and knock on Peter’s door; our mission was to give him a Woofing Cookies demo and ask if he would produce a song for us. We were young, green, and completely uncool. And what’s worse, we were star struck. Peter invited us in and tried to be a good host, but Joe (the bass player) and I never really gave him a chance. We made polite conversation for a few minutes and slunk out, our nerves getting the best of us.

When we left, we figured that was that. But it wasn’t.

A few days later, Peter found us lounging on the front porch of our house. (He was with another indie rock icon of the day, Keith Streng of the Fleshtones.)

A week or so later, we all turned up at the legendary John Keane studios in Athens for an afternoon session with Peter. It was an incredible day of recording. Peter’s skill as a producer—hearing how and where the music needed to grow, retreat, shift, and be shaped—was apparent from the word go. He was a kind and gentle mentor, guiding we four nitwits like a Shaman initiating a warrior into the ways of battle. The end result was probably the best song any of us have ever recorded.

There was no gesture large enough to repay Peter for his time and industry, so we left a case of beer on his front porch with a “thank you” note. (We later learned that half the case was stolen before it ever found its way to Peter.)

In the City helped the Cookies get signed to a small NYC label (Midnight Records), enabling us to put out our only full-length LP, Horse Gum Tortilla Shoes (we needed a name for the record that was actually dumber than the name of the band).

My dream of playing and recording music was coming true, thanks in no small part to the generosity of Peter Buck.

My experience with Woofing Cookies had such a large impact on me that it forms the backdrop for my debut novel, The Scar Boys. It’s a rock and roll coming of age story about a badly disfigured teen playing in touring punk band. While the book is very much a work of fiction, many of the scenes are drawn from my experiences in 1985. (The book is set in the 80s, and the band’s van does break down.)

There are hundreds of thousands of books published every year, and when you’re a unknown novelist you and your publisher seek every opportunity to promote your work. One tactic is to get other writers to read the book in the hope of getting a blurb for the front or back cover.

But why just writers, I thought?

A friend, the owner of the incredible Avid Bookshop in Athens, put me in touch with the team at R.E.M. HQ. I asked if they would get the book in front of Peter to see if he would be interested in providing a blurb, and they did.

Truth is, I didn’t even know if Peter would remember me or Woofing Cookies; this was a long shot at best. But Peter being Peter, a guy who clearly has a soft spot for nurturing aspiring artists, did remember and agreed. A few weeks later a blurb came back, and it is now displayed proudly on the front cover.

(I hope others will enjoy the book as much as Peter did. If you love indie/alt rock or punk, played or still play in bands, and/or remember the 1980s, I think you’ll get a pretty big kick out of it.)

Peter helped me when I was a struggling musician. Now he’s helped me again as I embark on a writing career. I owe the man a debt of gratitude that no amount of beer will repay.

PS — Peter, if you’re reading this, any chance you want to help get this book made into a movie? KIDDING! (Mostly.)

PPS — I’d love to know what you think about the book, about Woofing Cookies, or whatever. You can find me at lenvlahos.com