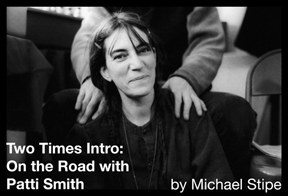 1) One hardcover copy of TWO TIMES INTRO: ON THE ROAD WITH PATTI SMITH by Michael.

2) A beautiful, one-of-a-kind photograph on heavy cardstock, signed by Michael, limited to 200 individually numbered copies. The image, taken by Michael, is of Patti Smith in New Orleans, at the Joan of Arc Statue, in 2010; it was shot while R.E.M. were recording COLLAPSE INTO NOW.

**The signed print is EXCLUSIVE TO THIS PREORDER AND WILL NOT BE MADE AVAILABLE FOR SALE ANYWHERE ELSE.**

Please be aware that preorders will ship on or before Friday, September 9.

Please click HERE for more information about the book, and to order the regular copies of the regular hardcover edition at retail price (without the limited edition print).

Click here to view sample pages from the book.

ABOUT TWO TIMES INTRO: ON THE ROAD WITH PATTI SMITH:

PHOTOGRAPHER MICHAEL STIPE followed friend and fellow musician Patti Smith on tour for two weeks in 1995. Two Times Intro is his intimate and evocative visual diary of her return to live performance, along with portraits of other cultural celebrities, such as Allen Ginsberg, who appeared with her. From 1975’s Horses to 2007’s Twelve, Smith’s creative vision has been a singular, explosive catalyst for artists and musicians worldwide–including Stipe. As William S. Burroughs writes in the introduction, Patti Smith’s “effect on the audience is electric, comparable to voodoo or umbanda rituals, where the audience members become participants, and are literally lifted out of themselves.”

IN ADDITION TO TEXT BY Michael (including a brand-new introduction for 2011), William S. Burroughs, and Patti Smith, there is also commentary from Thurston Moore, Kim Gordon, Lenny Kaye, Tom Verlaine, and others who have been inspired by Smith’s work.