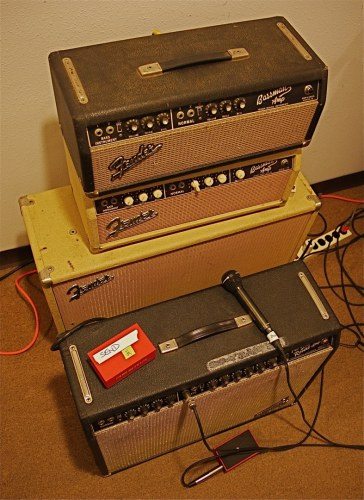 The band just wrapped up the recording session for their next record in New Orleans at the Music Shed. Up next: more recording this summer, and then… we’ll keep you posted on developments. If you haven’t already seen Michael’s tribute to five years of You Tube (which he shot in New Orleans), check it out.

As we reported earlier this week, Mike will be in Memphis to perform on May 15th at the Alex Chilton tribute show at the Levitt Bandshell in Overton Park. Advance tickets are available at Levittshell.org or at (888) 718-4253.

In related news, a feature-length documentary about Big Star, Nothing Can Hurt Me: The Big Star Story, is in the works. One segment of the film will include footage of Mike’s performance at Antone’s during SXSW, as the filmmakers were on hand to capture the special tribute to Alex Chilton in March (days after Chilton passed away unexpectedly of a heart attack). You can watch a trailer of the film and also learn more about the Big Star Story here.

The fabled 9:30 Club in Washington, DC, where the band played in the early days, will celebrate its 30th anniversary later this month. Mike and Bertis were quoted in this article on the 9:30 Club at Washington Post.com.

We came across this article on Record Store Day (April 17th) which calls the Chronic Town reissue on blue vinyl the Victory Piece of the exclusive RSD vinyl offerings… Be sure to check it out.

Finally, on the local front and in the category of local businesses and individuals making good, we wanted to give an HQ shout out to Hugh Acheson, who, for the fourth time, was nominated for a prestigious James Beard Award. Learn more about Hugh and his excellent dining establishments (which you should visit next time you’re in Athens) and projects here.

Also, congratulations to our friends at Hotel Indigo (where Michael’s buffalo sculpture was displayed) for receiving a hospitality design award. Well done. We knew there was something special about the place when we held the “Live At The Olympia” listening party there…

And finally, local bibliophiles and readers are excited to learn of a new independent book shop in Athens called Avid. Avid Bookshop is in the running for a $50,000 grant… Learn more about Avid here.